There have been shotguns made for almost every need. I suggest “almost” because as long as the scattergun has been around, it has been customized to meet specialized needs. Engineers at O.F. Mossberg & Sons have created another shotgun that’s certain to catch the eye of more than one crowd. If you’ve pined over the idea of an over-­the-­counter “shotty” to meet your 3-­Gun needs, the Mossberg 940 JM Pro may be the one.

From woods and waters, to law enforcement and home defense, shotguns still play a considerable role in the world of firearms. There is no doubt in my mind as a former Special Weapons and Tactics (SWAT) operator, that shotguns are a frontrunner in the application of force. From the most violent suspects to breaching doors, shotguns get the job done, sometimes solely by intimidation. Then there are all of the competitive disciplines. Shotguns will never become obsolete.

It was sometime in late 2018 when I became aware of Mossberg’s pursuit to make an out-­of-­the-­box, 3-­Gun-­ready shotgun — a complete system that fixes anything that came up short on their 930 JM ­Pro Series. This was much anticipated news, as I happen to be the owner of more than one imperfect 930. The news was made only more interesting by the fact that the “First Family of Shooting,” Jerry Miculek’s family, would be involved.

Magazine is same length as barrel and is fixed to 5 shots to comply with NZ Law. 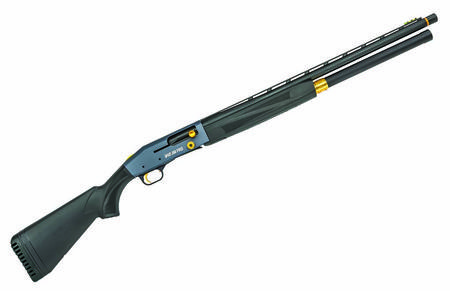