New UK importers Henry Krank’s are really pushing the boat out when it comes to Pietta semi-autos, their Pudsey based shop now carries the full range of Mistral 3’s from the basic to the most ornate. But whilst most people are more than aware of the gas powered Mistral, there’s apparently a little known inertia alternative known as the Zephyrus 3, but a keen eye is required to pick it out, as apart from the fact that the name along the side of the receiver is different, outwardly there’s no difference between the Zephyrus and the Mistral - even the prices are more or less identical.

The one aspect you can guarantee with all the Pietta semi-autos is classic good looks in a no-nonsense package, something the Zephyrus 3 has in spades. The gloss black surface, ready dovetailed for those who wish to fit a scope, is counterbalance by the chromed two-piece single claw rotating bolt, trigger blade and Zephyrus logo along the right hand side, the bolt release located in true Pietta fashion on the left side. The cross-bolt safety is situated to the rear of the anodised trigger-guard, the small bolt lock projecting downwards where the guard ends and the loading gate begins.

More or less identical to its gas powered cousin, a short barrel extension shrouds the 3” chamber, the 28” steel proofed tube topped off with a 7mm vented rib, small brass bead and a flush-fit chromed multi-choke muzzle, a set of three supplied as standard. What is of course different is that the barrel ring is fitted with an adjustable and replaceable bearing instead of a valve. This in turn slides over the magazine tube in the usual fashion, a larger knurled mag cap holding barrel and oversized and substantially chequered semi-beaver forend in place.

Finished with a type of semi–matte protective lacquer the stock is nicely grained and fits snug where the head butts up against the receiver. Terminating with a thin plastic butt-plate, the wide rolling comb keeps the head upright and well sighted along the length of the gun. Only the wide radiused semi-pistol grip gives any cause for concern, as whilst the angle is relatively gentle allowing the shooter a more or less straight wrist, the diameter could prove just a fraction to large for smaller hands although the extended panels of chequering are well rolled and attractive.

Taking into account the Zephyrus’ weight of 7lbs 4oz, the fact that it’s a large gun and that the long magazine spring starts to offer resistance far earlier than usual during compression, the general dynamics of this Pietta immediately indicate that it has an inherent ability to both control the direction of and dissipate recoil quite effectively.

Dimensionally it’s doubtful whether the Zephyrus would suit those of a more diminutive stature, the stock providing a length of pull measuring 14 1/8” combined with an average though jerk free pull weight of 8lbs. Similarly the drop at comb and heel work out to 13/8” and an exact 2” give this gun a noticeable presence when mounted. But it’s this Pietta’s overall equilibrium and build that offset the bulk, the balance point sitting directly beneath the 3” chamber, the gun heft and unexpected manoeuvrability promoting a refined, controlled swing whilst still being capable of rapid target acquisition.

Loaded up with 28g plaswad Express World Cups and a selection of Krank’s bespoke 30g game cartridges the only negative of the Zephyrus to highlight itself was the shell lifter’s stiffness when inserting additional rounds into the magazine along with an initial vibration as the gun functioned. As usual this was eliminated after a quick dose of Ballistol, the slide and spring requiring some additional lubricant.

What currently hobbles the Zephyrus is the Euro – Stirling exchange rate, a malaise afflicting nearly ever budget orientated shotgun imported into the UK. That said, whilst the cost of the Zephyrus may not be as competitive as it was, it’s still only pro rata compared to all the rest. But at £695 it’s still only just over a third of the price of those other well – known Italian inertia powered semis. It’s also physical proof that if an inertia driven shotgun is well made and embodies correct dimensions it doesn’t need to rely on recoil deflectors or other fancy embellishments for it to be comfortable to use.

Too many shooters are convinced they must have the latest semi-auto if they’re to achieve success. But after shooting Pietta’s Zephyrus 3 you quickly realise that basic just could be best. Equally, with its proven ability as both a clay breaker or vermin buster, not only is this Pietta’s versatility beyond question it also rates as one of the most enjoyable single-barrelled shotguns I’ve tested for many a month. 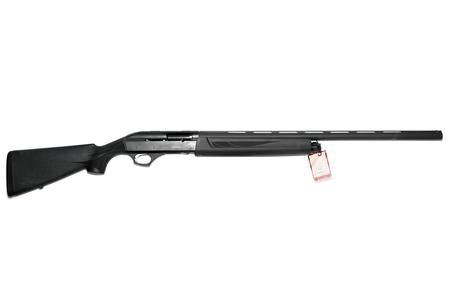